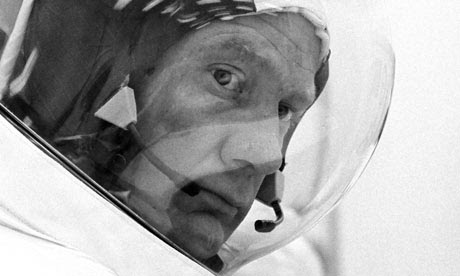 On June 10th of 2009 I saw a conversation between Buzz Aldrin, the famous astronaut, and Ernie Manouse, a local Houston journalist and broadcaster, at the Museum of Fine Arts Houston. On June 20th it was to be the forty year anniversary of the Apollo moon landing. Forty years since humans first touched down on a heavenly body other than Earth.

“Hopefully the wait will not be too long to have Mr. Aldrin sign my book. There are all sorts of people here. Half of them, like myself, are too young to have actual memories of the moon landing in 1969. There are myriad nerd chicks all over the whole theater. It does the heart good to see so many ladies into space exploration.

I wish I could go to outer space and go to the Moon. If I was on the Moon I would find an out of the way place with a lot of lunar soil and I would draw an angry picture in the soil for other explorers to find later! I would love to volunteer as an artist to meet any aliens we run across and have them share their species' art with me, so I could them talk about it to my fellow Earthlings.

There are so many people here that the ushers are seating them in the aisles, on the stairs. They are soon to start. We are so far underground in this auditorium that the cellphone reception is non-existent. They project images which will likely be included in the actual exhibition.
The conversation Between Buzz and Ernie goes well. Buzz is very funny and talks honestly about his feelings towards the current space program. I learn a lot and before I know it the talk is concluded. Now came the hard part.

I go out of the theater and head to the main level of the museum. It is there that the staff have set up Buzz to sign copies of his book. Seeing how long the line was made me think that nearly as many people waited in line during the talk as went to the actual talk in the auditorium. It was a long wait, and by the time I got up there Buzz was pooped. The man is in his 80's and it was getting late in an already long day.

I handed him my book and told him it was an honor to have met him and heard him speak. He may have heard me and he may not but either way I had gotten close to one of only a small handful of humans ever to set foot on another celestial body. I wish I had a weekend to hang with him so I could ply him with question after question. He would probably grow sick of me asking stuff but what an opportunity that would be!

Looking back I saw that Mr. Aldrin was going to still be signing books an hour or more into the night. I headed outside with my signed book, and looked up at the sky. It was like meeting Magellan, or Marco Polo. I got to listen to one of the greatest explorers in human history first hand. Quite a fun night.


Now, how do I get on one of the new flights to the Moon? I think that sending a trained artist to outer space would be such an amazing thing. The images created by an artist would add so much to our understanding of what it really is like to be there. Photography does not do the experience justice. Maybe I should petition the government to create an astronaut-artist position!